This brings the grand total of funds raised for the historic firehouse to more than $70,000 from Morningside Mile alone.

The block party and one-mile race was held on Sunday, March 26, and drew a thousand Atlanta-area and local Virginia Highland residents to support the neighborhood landmark. The event featured giveaways and tastings from Morningside restaurants, shops and associations, plus the annual Doc Chey’s Noodle Eating Contest. 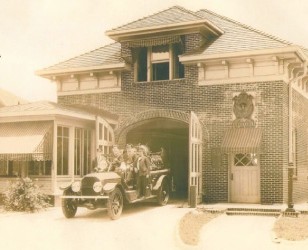 Located in the Virginia Highland neighborhood, Fire Station 19 has been a city landmark for more than 90 years and is Atlanta’s oldest operating fire house. Based on its age, that station was on the city of Atlanta’s replacement list for 2016. Thanks to grassroots support of Morningside Mile and other local efforts, the station is saved, but needs funds to renovate.  The $600,000 Renew Atlanta grant is earmarked for construction, and the $130,000 raised by the community will fund fees for the architects and sustainability initiatives. A neighborhood committee featuring architects, historians, preservationists, contractors and community leaders, including Rich Chey, has come together to lead and conquer this charge.

Since its inception in 2003, HomeGrown Charities, the charitable arm of Home Grown Restaurant Concepts, has raised more than $300,000 to benefit local non-profits and more than $128,362 for station 19 alone through annual events such as Breakfast with Santa and Morningside Mile.